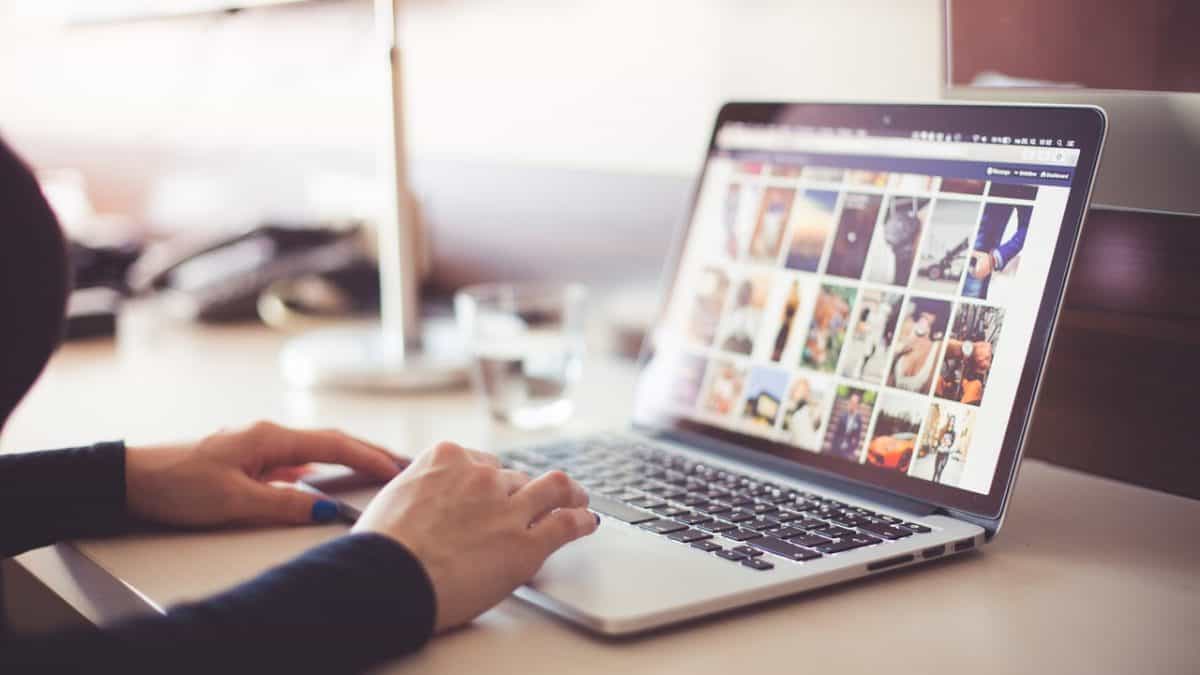 Oh, the Ethics of Influencer Marketing!

Unless you’ve been living under a rock for the past couple years, you’ll know that influencer marketing has quickly become one of the biggest marketing trends to hit this planet.

Basically, influencer marketing is when businesses team up with popular social media users (aka influencers) to post to their massive following about a product, service or event, as a form of product promotion – in order to (hopefully) influence consumer purchases.

Think about it, opening up Instagram to see your fav celeb raving about “THE BEST” face cream and how it has solved all their skin problems. There’s a decent chance followers of that person with skin problems of their own may give it a try after seeing that – versus just seeing a picture of said product on a billboard.

If you’re online on the daily, you’ve probably scrolled past plenty of cases influencer marketing, whether you realised it or not.

This marketing tactic is on fire right now. It’s current, it’s effective and it really works. Which is why it’s the place to be right now, no matter the size of your business.

But just as with any form of marketing and advertising, regulations are necessary to keep things running smoothly and ethically. However, being a new form of marketing, there are lots of grey areas on what is and what isn’t allowed.

So, we’ve done some digging to fill you in on the ethics behind influencer marketing.

It’s all about transparency

Across social media (but in particular on Instagram), influencers are being paid massive amounts to promote products and brands – and sometimes, without disclosing that they are doing so.

Sometimes – it’s not so clear whether or not a post is independent and genuine, or in fact a sneaky, disguised sponsorship deal.

And up until now we unfortunately have had no real guidelines to ensure that the consumer is being protected or made aware of what is an ad versus a post, such as the Truth-in-Advertising guidelines in the USA.

Look – as a consumer, you wouldn’t look at a billboard and wonder what it’s purpose was. You would know straight away that the objective of that billboard is very clearly to influence a specific consumer purchase.

And when you run ads on Facebook and Instagram, despite appearing amongst regular posts on news feeds, they are still very clearly labelled as sponsored ads.

So why should there be any difference with this new form of advertising?

The problem is that the technology has been developing so rapidly that the legislation has had trouble keeping up.

And what we’ve been left with are lots of grey areas in the world of influencer marketing, especially when it comes to areas like Instagram stories.

So, to help combat this, legislation is cracking down on social influencers and companies, requiring them to now be completely transparent about content that is sponsored or paid for.

As of March 1 2017, the Australian Association of National Advertisers (AANA) updated the Advertiser Code of Ethics, including a new provision to ensure that all advertising is transparent.

“Advertising or marketing communication must be clearly distinguishable as such to the relevant audience”, is the how they put it gently.

This now applies to ALL advertisers and marketers who are promoting any type of product, service or brand to the Australian public.

So yep, that includes influencer marketing.

This is the first time ever that we have ever seen mention of “influencers” in advertising guidelines (after all, it is a fairly new concept and legislation has only kept up so much).

Basically – what this means is that influencers now have to stop camouflaging those face cream product plugs to seem like they just purchased the product that morning at their local Priceline “just because”.

We are talking about transparency here.

This new provision ensures that it needs to be clear to the target audience that something is an advertisement.

The most obvious type of influencer marketing is when a company arranges with an influencer to post content on their social media regarding their brand. In this case, according to the AANA, it is considered marketing communication and therefore must be clearly distinguishable. And this is done correctly when we see posts including a tag @ the company, hashtags regarding the company name, #ad or similar wording.

But it’s important to note that an arranged post doesn’t just apply to those simple cash deals – it can also apply to free product exchanges or other types of non-money deals.

Of course, this legislation varies a bit country to country. In the US for example, the Federal Trade Commission (FTC) updated its laws similarly, surrounding brand endorsements on social media. But in the US, the rules go so far as to say that influencers must even disclose all free products they talk about. 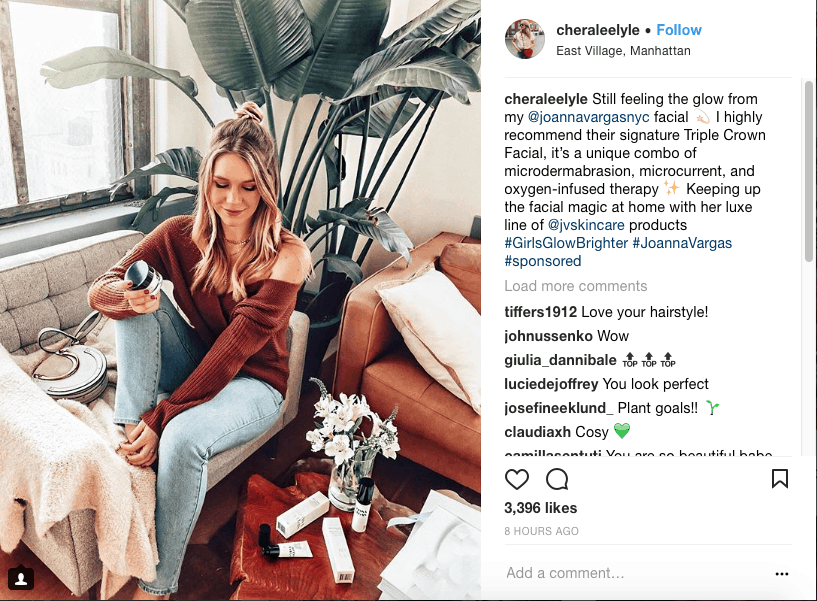 Of course, with our social media platforms developing and evolving so quickly, there are still some grey patches where influencers and brands have been able to get around the rules, even in the past year since the latest provisions came into play.

For example – take when a company sends an influencer a free product in the mail, without any obligation that they must post about said product on social media.

In this case, the AANA’s Code of Ethics says that since the company has no control over whether any promotion occurs following this, if it happens to be posted about later by the influencer, it is NOT considered advertising or marketing communication.

So this is why we are seeing influencers getting free personalised packages “from the nice people at Cotton On” on a regular basis now. They are sending their products for free, in the hope that influencers will give it a good, genuine review.

In the case of Melbourne author/entrepreneur Zoe Foster Blake (@zotheysay), she was majorly criticised for posting the below photo of a fridge full of You Foodz without saying it was sponsored: 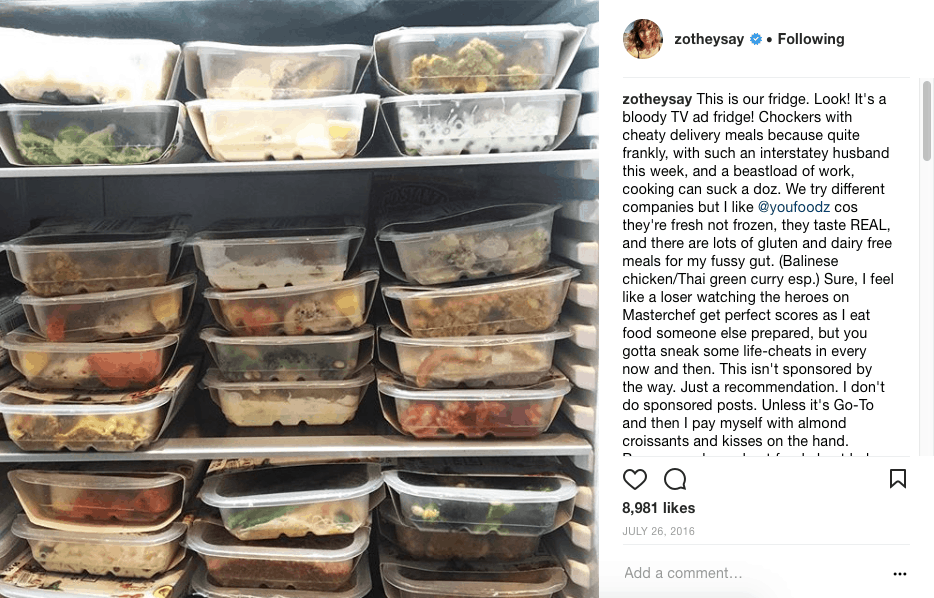 Well, believe it or not, she simply just loved the product and posted about it. WOULD YOU BELIEVE IT? She wasn’t asked to and she wasn’t paid to do it. So yes, she is completely allowed to post this all she wants. But sadly, the reality is that with so many celebs doing sneaky plugs nowadays, the lines have become a little blurred on what is versus isn’t actually sponsored.

And of course, influencers are finding other loopholes as well to help camouflage the fact they are posting something for the sake of money. Just throwing in a #sp could mean Spanish for all we know, anyways… 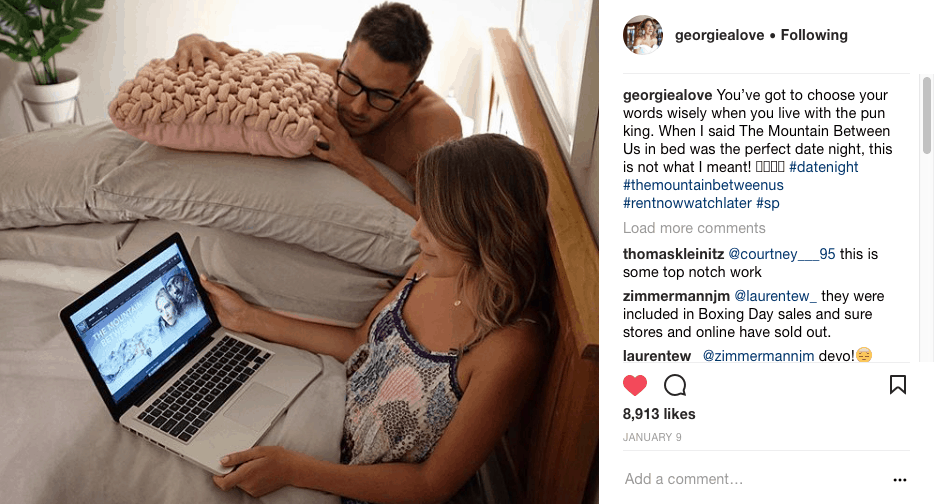 And then there are Instagram Stories, which work a lot differently from regular posts.

To recall, under the updated legislation, influencers must use hashtags when promoting a product on Instagram. But in Instagram stories, hashtags haven’t always been used as heavily as in regular posts, so people have been getting around it. Talk about another massive escape route where people have been able to get away without directly saying they are being sponsored.

Where the big problems come out

But see, this lack of transparency is where the major ethical problems really start to arise. When influencers aren’t disclosing something is an ad, or when they accept deals for products that they don’t normally even use or know anything about…

Remember FYRE Festival? That ridiculous mess of a festival last year that had all that celebrity hype but completely flopped and ended up looking like a scene out of The Hunger Games. That was one marketing fail that we find incredibly interesting.

So when the festival flopped horribly, and was not at all what it was described to be, what happened to these influencers who had been paid thousands to promote it?

But really, if you are promoting something, you should really be held accountable for false promotion in situations like this.

How Instagram is trying to combat these red flags

So, all these grey areas we’ve been discussing are exactly the reason why Instagram has now created the new “Paid Partnership” feature: to help ensure transparency and consistency in endorsed content.

This means that when an influencer has teamed up with a business to post about them, they can use a paid partnership tag to link up and make the sponsored post clear as can be.

This new tag looks a little something like this: 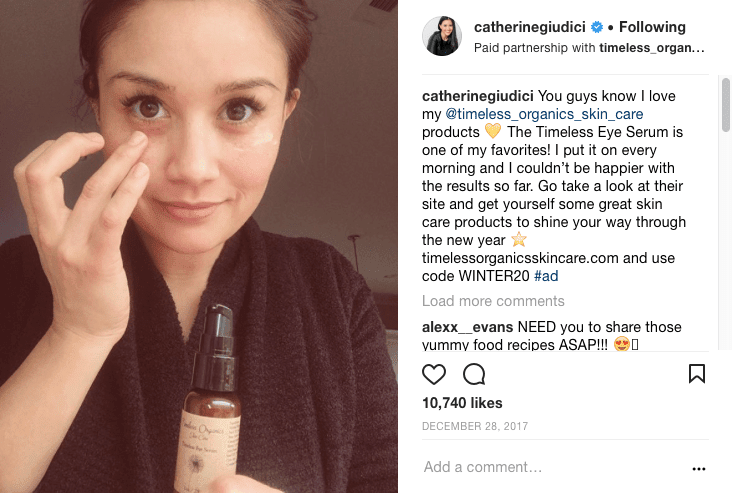 But hey, not only does it show the general audience that a post is sponsored, using this tag is also great for the company, as it also allows them to view reach and engagement and monitor how well these posts are performing.

The great thing is, this also works on stories.

And on stories, businesses can actually track not only reach, but also view taps forwards and backwards, as well as replies or exits – all crucial information for bettering future campaigns.

Win-win for everyone if you ask me.

This feature is only a few months old and is currently only being tested with limited influencers and businesses, but we will likely see it roll out in full later this year.

In case this wasn’t all enough to scare you, we’ve heard the new fines that the Australian Competition and Consumer Commission (ACCC) is laying down. They now have the power to fine influencers or brands for not disclosing that a social media post is sponsored (aka. breaching Australian Consumer Law).

Ready to hear the hefty fine?

But for the brand, we are talking $1.1 MILLION.

Yeah, better safe than sorry if you ask me.

Of course, as a business owner or a person of influence, nobody wants to go breaking the rules. So as the platforms evolve so rapidly around us, it’s important to stay up to date on the evolving rules and regulations to go along with them.

And after all, paid sponsorships + being transparent = more credibility and stronger relationships between the brand, the influencer and the audience.

People want real, they want genuine. So just clearly label your content, and everyone is happy!

To learn more about what exactly needs to be done for your influencer marketing to be “clearly distinguish”, check out the AANA’s Clearly Distinguishable Advertising: Best Practice Guideline.

(BTW, this blog is #notsponsored)

Kick start your digital domination. Get our Digital Marketing Blueprint for FREE!